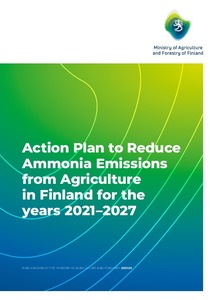 Publications of the Ministry of Agriculture and Forestry 2021:20
Näytä kaikki kuvailutiedot

International treaties and EU legislation oblige Finland to reduce its ammonia emissions into the air. The emission reduction targets were determined in the Gothenburg Protocol of the Convention on Long Range Transboundary Air Pollution and the corresponding National Emission Ceilings Directive.

According to the Gothenburg Protocol, from 2020 onwards, Finland’s ammonia emissions must be at least 20% lower than the level of emissions in 2005. The commitments of the Protocol were enforced in the EU with the National Emission Ceilings Directive (2016/2284).

Approximately 90% of Finland’s ammonia emissions originate from agricultural sources, which is why most of the actions to reduce the level of emissions are targeted to agriculture. In agriculture, ammonia is released from livestock manure in livestock buildings and during the storage and application of manure. Organic and inorganic fertilizers containing nitrogen also release ammonia.

The most effective measures to reduce ammonia emissions from agriculture involve manure, its storage, and its application. Ammonia emissions can also be reduced by measures involving the feeding of domestic animals, but these measures are more difficult to regulate and to assess their impact than measures relating to the management of manure.

This action plan and the measures therein aim to reduce the ammonia emissions from agriculture to the required level.

The action plan was prepared in cooperation between the Ministry of Agriculture and Forestry and the Ministry of the Environment, the Finnish Environment Institute, Natural Resources Institute Finland, the Finnish Association for Nature Conservation, and the Central Union of Agricultural Producers and Forest Owners (MTK). The thematic group on agriculture has done most of the preparation work during the implementation of the National Air Pollution Control Programme 2030.