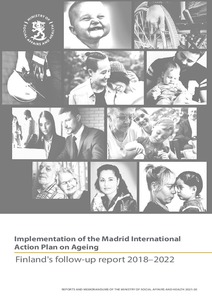 The review and appraisal of the Madrid International Plan of Action on Ageing adopted at the Second World Assembly on Ageing in 2002 is carried out once every five years. This follow-up report by Finland describes the development work carried out in Finland since the previous report which ended in 2017. In Finland, preparedness for the ageing of the population has been developed for a long time, and the development work described now is based on a continuation.

Promoting well-being and health, as well as work ability and functional capacity are key areas for development work. The aim is to help maintain the functional ability of older people, which enables independent living as well as the working and functional capacity of older working-age people, so that they can continue to be competent, healthy and motivated until retirement age. Social security has also been developed to meet the needs related to the ageing of the population. The change in the earnings-related pension system in 2017 has supported the continuation of careers and postponed transitioning to old-age pension. The reform of the service system aims to respond to service needs in a timely and effective manner.

The ageing policy implemented in Finland, its objectives and contents, are largely in line with the UN objectives. The report links the development work carried out in Finland to international context.