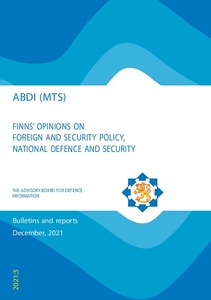 The Advisory Board for Defence Information ABDI 2021:3
Näytä kaikki kuvailutiedot

A survey commissioned by the Advisory Board for Defence Information (ABDI) explored the opinions of Finnish people on Finnish foreign and security policy, defence policy and national defence. There are questions on factors affecting safety and citizens’ sense of security pertaining to developments over the next five years. The survey also included questions on factors causing concern, preparations against various threats, the future of the European Union, Finland’s success in combating the coronavirus, confidence in the Defence Forces’ ability to counter military threats and attitudes towards cooperation between the European Union and NATO. Altogether 23 questions were asked, three of which for the first time.

Commissioned by the ABDI, market research company Taloustutkimus Oy carried out the survey. Because of the coronavirus situation, the survey was carried out as a combination of personal interviews as a part of omnibus research and an internet panel by Taloustutkimus Oy. The sample size was 1001 people. The target group of the study comprised the entire population between the ages of 15 and 79, with the exception of the Åland Islands.