Extremist speech online and in the Finnish news media 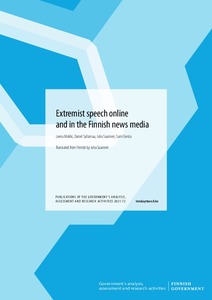 Publications of the Government's analysis, assessment and research activities 2021:72
This publication is copyrighted. You may download, display and print it for Your own personal use. Commercial use is prohibited.
Näytä kaikki kuvailutiedot

This study examines expressions of extremist ideologies and beliefs in the Finnish-language media environment. It approaches the topic from two angles by looking at 1) online speech that approves of the use of violence or dehumanizes other people and 2) the national news media’s handling of violent extremism and the ideologies and beliefs connected to the phenomenon.

The study demonstrates that speech that approves of the use of violence and dehumanizes others can be found on public, Finnish-language online platforms. It is most prevalent in far-right and anti-immigration online discussions yet also features in far-left discussions, albeit to a lesser degree. Online speech that pertains to the incel and school shooting subcultures is similarly an intermittent occurrence in the material studied. Finnish-language jihadist speech has, on the other hand, been increasingly rare on public online platforms after measures targeting such material were tightened.

The news media reports on violent extremism in the aftermath of attacks and other such events in particular. It focuses on the events and reactions to them while directing lesser coverage towards the ideologies and beliefs that may underpin them. While the news coverage is largely in line with the standards and norms of reporting on the topic, possibilities for further improvement were also identified.

This publication is part of the implementation of the Government Plan for Analysis, Assessment and Research (tietokayttoon.fi). The content is the responsibility of the producers of the information and does not necessarily represent the view of the Government.