Revised National Plan of Action against Trafficking in Human Beings 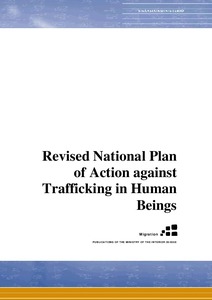 Sisäasiainministeriön julkaisut 2008:29
This publication is copyrighted. You may download, display and print it for Your own personal use. Commercial use is prohibited.
Näytä kaikki kuvailutiedot

The Finnish Government adopted on 25 August 2005 a first National Plan of Action against Trafficking in Human Beings. In the Plan of Action, it was required that the steering group to be appointed to monitor the implementation of the Plan of Action should assess the success of the measures taken and draw up a revised Plan of Action. The steering group submitted its proposal for the revision of the Plan of Action on 5 December 2007. The Government adopted a resolution on the Revised National Plan of Action against Trafficking in Human Beings on 25 June 2008.
The Revised National Plan of Action takes special account of the identification of victims, which has proved to be a challenging task. The aim is to keep the identification threshold low to make sure that the assistance will reach all victims. Authorities' ability to identify victims will be improved by systematically developing their expertise and by providing customer service workers in various areas with training and instructions.
In addition to the actions of authorities, the outreach work carried out by the third sector, and the initial guidance and orientation are of major importance when locating and identifying victims of human trafficking within Finland. Organisations involved in outreach and advisory work to identify victims of human trafficking will be funded by the central government. Authorities will intensify their cooperation with NGOs and labour market organisations on combating human trafficking.
Furthermore, the networks and measures related to assisting victims of human trafficking will be further extended, if necessary. When combating human trafficking offences, the most important aim is to harmonise the interpretation of the Penal Code and designations of offences as the number of offences is on the increase, which adds to the workload in pre-trial investigation and the work of prosecutors and courts. In addition to crime prevention, authorities should make sure that the work on exploring victim protection will proceed. Furthermore, support systems will be created for victims.
In the combat against trafficking in human beings, greater account will be taken of curbing demand. Increased information will be provided in good cooperation among various actors and the media to promote public awareness, including information directed to victims. Account will also be taken of sufficient guidance offered to employees entering Finland, of monitoring compliance with the terms of employment and of labour protection measures. It is also important to combat grey economy and involve labour market organisations in combating exploitation of labour and trafficking in human beings.
When the Revised National Plan of Action against Trafficking in Human beings was adopted, the Ombudsman for Minorities was appointed the national rapporteur for trafficking in human beings. Resources will also be allocated to academic research round the phenomenon of trafficking in human beings and to study and research work carried out by authorities in different sectors.
In 2009, the legislation on and systems for combating trafficking in human beings and their compatibility will be evaluated in full by independent external evaluators. The steering group appointed to monitor the implementation of the Revised National Plan of Action will, on the basis of the evaluation and in cooperation with the national rapporteur, draw up recommendations for further development of legislation on and measures for combating trafficking in human beings.