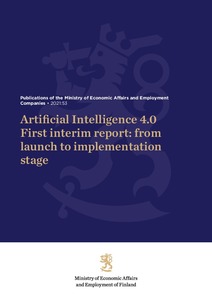 Publications of the Ministry of Economic Affairs and Employment 2021:53
This publication is copyrighted. You may download, display and print it for Your own personal use. Commercial use is prohibited.
Näytä kaikki kuvailutiedot

On 13 November 2020, Minister of Economic Affairs Mika Lintilä appointed a steering group led by Jussi Herlin to prepare an action plan for Finland to speed up the introduction of artificial intelligence and to promote the fourth industrial revolution. The action plan implements the strategy of green and digital recovery following the COVID-19 crisis and responds to Finland’s specific challenges related to digitalisation, such as the relatively low level of digital investment, slow reform of value creation among SMEs and delays in strategic investments to promote the fourth industrial revolution in Finland.

The preparation and launch of the program have been guided by the view that the most significant effects of artificial intelligence will become visible when it is applied as part of a wider economic, technological and social change, the so-called fourth industrial revolution.

The report is the first interim report of the program. It describes the current state of the fourth industrial revolution and progress of advanced digitalisation in Finland. This is done by analysing surveys and statistics on digitalisation of companies, with a particular interest in the digitalisation policy framework of the European Commission.

In addition, the report makes a proposal for a comprehensive target state that should be pursued when accelerating digitalisation during the Fourth Industrial revolution in Finland. The development of digitalisation should be done in cooperation between companies, research and academia as well as training institutes and public organisations. The OKR-method is used to present the vision and objectives leading to the target state, the preliminary key results and a plan for the thematic working groups.