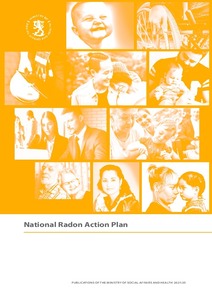 Ministry of Social Affairs and Health

Publications of the Ministry of Social Affairs and Health 2021:35
Näytä kaikki kuvailutiedot

Radon is the leading known cause of lung cancer after smoking. Exposure to radon increases the risk of lung cancer, particularly for smokers. Radon is also the biggest known cause of lung cancer for non-smokers. The majority of lung cancers could be prevented by stopping smoking and reducing exposure to radon. This Action Plan sets out long-term goals and measures to reduce the risk of lung cancer from radon in Finland. It focuses on reducing radon concentrations in indoor air, because radon in indoor air is usually the largest source of radiation exposure. Radon gas found in indoor air is released from the soil and bedrock underneath or surrounding buildings, building materials or borehole water. The Action Plan is based on Article 103 of the Directive laying down basic safety standards for protection against the dangers arising from exposure to ionising radiation (2013/59/Euratom). The Article obliges Member States to draw up a national action plan addressing long-term risks from radon exposure. Finland has fulfilled this obligation by enacting section 159 of the Radiation Act (859/2018). Further provisions on the Action Plan and its content are laid down in the Government Decree on Ionising Radiation (1034/2018, section 54 and Annex 6).