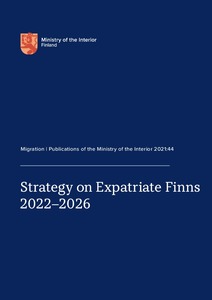 Publications of the Ministry of the Interior 2021:44
Näytä kaikki kuvailutiedot

The strategy is a continuation of three previous foreign policy programmes. It was prepared by a cross-administrative working group, with the Finland Society and the Migration Institute of Finland also involved in the process. The preparation process included extensive consultations with expatriate Finns and expatriate Finnish actors and use of the results of studies and surveys on expatriate Finns.

The strategy sets objectives and actions related to:


The implementation of the strategy will be monitored in the working group on expatriate Finns in central government and in webinars, which will be organised annually in cooperation with the Finland Society.