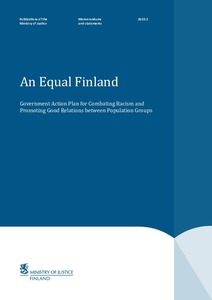 Publications of the Ministry of Justice, Memorandums and statements 2022:2
This publication is copyrighted. You may download, display and print it for Your own personal use. Commercial use is prohibited.
Näytä kaikki kuvailutiedot

On 21 March 2020, a broad-based preparatory working group was appointed to prepare the Action Plan. The working group included representatives from all ministries and the Prime Minister’s Office, the Association of Finnish Local and Regional Authorities, the Sámi Parliament, the Advisory Board for Ethnic Relations, the Advisory Board on Romani Affairs, the Swedish Assembly of Finland, the Human Rights Centre and the Non-Discrimination Ombudsman. The working group will continue its operations until the end of 2023, guiding and directing the implementation and evaluation of the Action Plan.

The Action Plan is based on a situation assessment, and it includes eight key objectives and 52 measures to be carried out in different branches of government in 2021–2023. The Action Plan aims to dismantle structural inequalities in society, promote non-discrimination in the Finnish working life, strengthen the authorities’ equality competence, raise awareness of racism and its various forms, and develop research and data collection related to racism.