Youth work and climate change : A follow up on the 2019 Finland's Presidency EU Council debate and questions about future 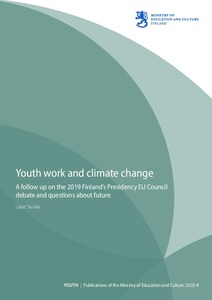 Publications of the Ministry of Education and Culture, Finland 2022:4
Näytä kaikki kuvailutiedot

A survey on the national youth policy representatives of the EU countries looked at the effects of youth climate activism on youth work and youth policy: what was its visibility, has it appeared on youth work agendas, how should the youth field react to it, what are the future plans of support and the relationship to EU climate policies?

Results showed that climate change had started to appear on the youth work agenda, but not yet as a universally adopted priority. Young people were felt to have the right to strike for the climate and youth work and youth policy were to react to this concern, but responses were divided as to the significance of the global strikes. Almost 2/3 thought that mass demonstrations represent an emergent way of youth agency, while 1/3 felt they were only a singular phenomenon. Respondents were "hesitantly favourable" to perceive climate change as a youth field challenge. Also, not all respondents "totally agreed" to engage in collaboration with European Climate Pact or to utilise Erasmus+ to combat climate change.