Vision 2030 : Towards a responsible and competent ownership society 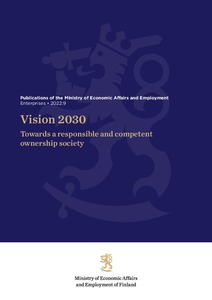 Publications of the Ministry of Economic Affairs and Employment 2022:9
This publication is copyrighted. You may download, display and print it for Your own personal use. Commercial use is prohibited.
Näytä kaikki kuvailutiedot

Ownership means taking responsibility and carrying risk. Ownership has a strong impact on economic growth, investment and productivity. Good ownership has a positive impact on the success of a company at the different stages of its life cycle. Success creates jobs, income and prosperity, which help safeguard the financial basis of the welfare society in the future. Good ownership is responsible ownership.

The working group’s proposals aim to make Finland and Finnish people considerably stronger in meeting the challenges of the future. Finland’s development is lagging behind the other Nordic countries, with GDP expected to grow by just 10% up to 2030. Stronger growth is necessary to ensure the current standard of living and level of services.

The report presents a vision of Finland as an ownership society in 2030, where the Finnish identity encompasses a culture of responsible and competent ownership and a positive attitude to prosperity. Ownership is equal and broad-based, and it matters to all of us.

The short-term proposals in the report can realistically be implemented already during the current government term. The longer-term proposals are themes for the Government Programme 2023–27.