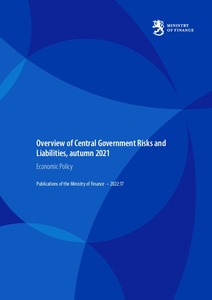 Publications of the Ministry of Finance 2022:17
This publication is copyrighted. You may download, display and print it for Your own personal use. Commercial use is prohibited.
Näytä kaikki kuvailutiedot

Central government liabilities have been increasing for many years, not only in terms of their nominal value but also in relation to the size of the economy. The COVID-19 pandemic has further intensified this long-term trend.

In 2008, just before the start of the financial crisis, central government debt totalled EUR 54 billion, representing approximately 28 per cent of GDP. At the end of 2020, central government debt amounted to about EUR 125 billion, nearly 53 per cent of GDP. In other words, the amount of debt in euros has more than doubled in just over a decade, and the debt ratio has almost doubled.

Central government contingent liabilities have also shown strong growth over a long period. At the beginning of last decade, the government's guarantee liabilities totalled about EUR 23 billion, or about 12 per cent of GDP. At the end of 2020, liabilities amounted to EUR 62 billion, bringing the liabilities-to-GDP ratio to over 26 per cent.

Significant growth in liabilities over a long period, combined with moderate long-term growth prospects, raises concerns about the central government's risk-bearing capacity. In the coming years, it would be important to strengthen the sustainability of general government finances to ensure Finland is prepared to face a potential negative economic shock in the future.