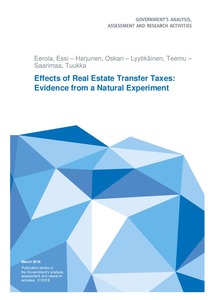 Valtioneuvoston selvitys- ja tutkimustoiminta 17/2018
This publication is copyrighted. You may download, display and print it for Your own personal use. Commercial use is prohibited.
Näytä kaikki kuvailutiedot

We study the effect of the transfer tax on housing transactions and household mobility in Finland using
housing transaction data and micro data on the entire population in 2005–2015. In March 2013, the
transfer tax rate was increased for housing co-operatives and the tax base was broadened to include
housing co-operative loans, but the tax treatment of directly owned single-family houses remained unchanged. The reform allows a differences-in-differences design to be used.
We find that the tax reform was anticipated in the housing market. Some transactions that would have
taken place after the reform were brought forward to late 2012 and early 2013 so as to avoid the tax
increase. The anticipation effects were especially pronounced for new construction and for resales with
relatively large housing co-operative loans. We also find that the tax increase on co-ops had a negative
effect on the transaction volume of housing units in co-ops in the longer run, and may have influenced
transactions of single-family houses.
Furthermore, the transfer tax reduces mobility, both within and across labor market areas. Our results
suggest that the tax creates sizable welfare losses due to increased mismatch of housing units and
households and workers and jobs.

This publication is part of the implementation of the Government Plan for Analysis, Assessment and
Research for 2017 (tietokayttoon.fi/en).
The content is the responsibility of the producers of the information and does not necessarily represent the view of the Government.