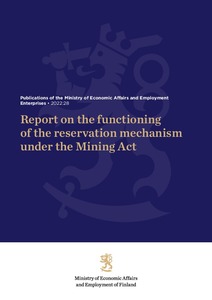 Publications of the Ministry of Economic Affairs and Employment 2022:28
This publication is copyrighted. You may download, display and print it for Your own personal use. Commercial use is prohibited.
Näytä kaikki kuvailutiedot

The mining legislation currently in force in Finland is based on a claim system where, regardless of the ownership of the property, the right to exploit a deposit containing mining minerals belongs to the party who found the deposit.

The key aim of the claim system is to promote the position of those who find mining minerals regardless of the ownership of properties and create incentives to exploration and mining operations.