Government report on changes in the security environment 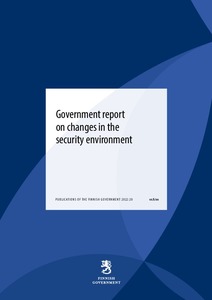 Publications of the Finnish Government 2022:20
This publication is copyrighted. You may download, display and print it for Your own personal use. Commercial use is prohibited.
Näytä kaikki kuvailutiedot

Following Russia’s invasion of Ukraine, a fundamental change has taken place in the security and operating environment of Finland and Europe. This Government report to Parliament assesses changes in the operating and security environment and the effects of the changed security situation on the economy, resilience, security of supply, internal security, cyber security, hybrid influence activities and critical infrastructure.

The report examines the development of national defence capability, the European Union as a security policy actor and closer bilateral cooperation with Sweden, Norway, other Nordic countries, the United States and the United Kingdom, and multilateral defence cooperation initiatives. Closer cooperation with NATO and the effects of Finland's possible NATO membership are also assessed.

In response to the changed security situation, Finland will continue active and proactive diplomacy, strengthen its defence capability and intensify cooperation with key partners. The importance to Finland’s security of maintaining resilience in society, national defence and internal security is highlighted.

Page 18 was updated on 2 May 2022 and this version replaces the previous one published on 13 April 2022. The word ”impartiality” has been replaced with ”neutrality”.