Report on Finland’s Accession to the North Atlantic Treaty Organization 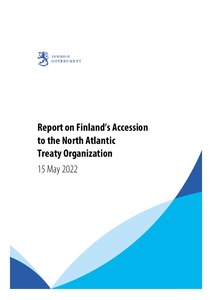 Finnish Government
This publication is copyrighted. You may download, display and print it for Your own personal use. Commercial use is prohibited.
Näytä kaikki kuvailutiedot

The report describes the grounds for Finland’s NATO membership. In the report, the Government proposes that the President of the Republic of Finland decide, pursuant to section 93, paragraph 1 of the Constitution of Finland, that Finland will apply for membership in the North Atlantic Treaty Organization (NATO) after hearing Parliament.

Neither the Constitution of Finland nor Finnish legislation limits Finland’s ability to join a military alliance. Accession would not affect the status of the Åland Islands, which is based on international treaties, and this status is not an obstacle to accession.

13 April 2022: Government report on changes in the security environment