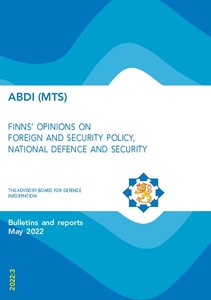 The Advisory Board for Defence Information ABDI 2022:3
This publication is copyrighted. You may download, display and print it for Your own personal use. Commercial use is prohibited.
Näytä kaikki kuvailutiedot

A survey commissioned by the Advisory Board for Defence Information (ABDI) explored the opinions of Finnish people on the willingness to defence your country, military non-alignment, Finland`s membership in NATO, the impact of the Organization for Security and Co-operation in Europe (OSCE), the European Union, the UN, NATO, the United States, Russia and China on Finland’s security, confidence in the Defence Forces’ ability to counter military threats, of the military situation in Finland’s neighbouring areas and military cooperation. Altogether eight questions were asked, all of them have been asked before by ABDI.

Commissioned by the ABDI, market research company Taloustutkimus Oy carried out the survey. Because of the coronavirus situation, the survey was carried out as a combination of personal interviews as a part of omnibus research and an internet panel by Taloustutkimus Oy. The sample was 1002 people The target group of the study comprised the entire population between the ages of 15 and 79, with the exception of the Åland Islands.

The report comprises a text section with illustrating figures that also present the time sequence of the questions asked in previous surveys. These illustrations were prepared by Taloustutkimus Oy.