Equality in sports and physical activity in Finland in 2021 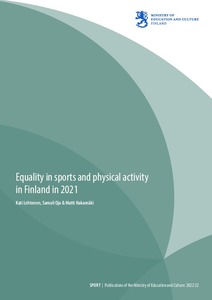 Publications of the Ministry of Education and Culture, Finland 2022:22
This publication is copyrighted. You may download, display and print it for Your own personal use. Commercial use is prohibited.
Näytä kaikki kuvailutiedot

This review presents current themes in physical activity and sports from the perspective of gender equality, reports on the most recent research results broken down by gender, and describes, based on available information, the changes that have taken place. The key perspectives examined in the review are physical activity, competitive and elite sports, civic activity in physical activity, and decision-making and management. The structure and contents give strategic guidance and direction for sports services, which are based on the principle of knowledge-based management and continuous impact assessment. Similar reviews were also published in 2011 and 2017.

Boys and men engage in physical activity more often and more intensively than girls and women. Women increasingly use private sector service providers, and men are more active in sports clubs than women. In the case of children and young people, one in two girls and boys engage regularly in physical activity in sports clubs. In competitive and elite sports, the conditions for women to engage in sports and elite sports have improved. In recent years, women have also won more medals in championship competitions than men.

The number of women in management and decision-making positions in the sports sector has both remained the same and evolved. On the one hand, no significant gender differences exist between those in managerial positions in central and regional administration. One in three of the board members of all national and regional sports organisations are women. There has been no significant change since the early 2000s. On the other hand, a growing number of board members and operative leaders of the sports federations are women. In recent years, several mentoring and training projects have been used to support training for coaching and leadership for women. The share of women has increased in the sector’s professional organisations.

Promoting gender equality is a key sports policy objective. At present, gender equality ties in with human rights, sustainable development and intersectionality, for example. In the corporate social responsibility programme adopted jointly by the Finnish Olympic Committee and its member organisations, equality is one of the key elements of the fair play principles. Gender is also part of a wider identity debate, which is reflected in data collection, statistics and reports.

More national policy measures are being implemented at the local government level than before. Pedestrian and cycle routes maintained by municipalities as well as environments that support everyday physical activity are all measures that promote gender equality. Gender-disaggregated information will also be needed in the future to support decision-making on sport policy and to create opportunities for sport and physical activity. Information and data should be collected regularly and systematically.