Strategy of the National Commission on Sustainable Development 2022–2030 : A prosperous and globally responsible Finland that protects the carrying capacity of nature 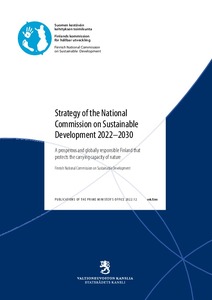 In 2021, the Finnish National Commission on Sustainable Development drew up a national 2030 Agenda roadmap, which is a medium-term plan detailing the actions Finland needs to take to achieve the goals of the Global 2030 Agenda for Sustainable Development (the 2030 Agenda) adopted by the UN in 2015. Drawing up the roadmap was one of the objectives set in the Programme of Prime Minister Sanna Marin's Government, and the task was assigned to the Commission in December 2020.

The Commission adopted the 2030 Agenda roadmap in a meeting in February 2022 and submitted it to the Government for use in its work. At the same time, the Commission decided to reform its strategy so that the main content of the roadmap would form the core of the new strategy. The new strategy, 'A prosperous and globally responsible Finland that protects the carrying capacity of nature', was adopted at the Commission's meeting on 10 March 2022.

The new strategy is guided by the six areas of change defined in the work to draw up the 2030 Agenda roadmap (see figure on page 10). For each area of change, the strategy includes a vision extending to 2030, a set of objectives that translate the visions into concrete terms, and a description of the key measures that will affect different sectors of society and play a key role in bringing about change. In addition to the six areas of change, the strategy discusses how Finland is supporting the implementation of the 2030 Agenda globally.

The strategy includes five cross-cutting principles, which the members of the Commission have committed to comply with in its implementation. The principles are the following: ensuring fairness, equity and gender equality; facilitating the inclusion and participation of society at large; paying special attention to the most vulnerable (leaving no one behind); ensuring long-term commitment and policy coherence; and taking global responsibility.

The Commission's strategy serves as a long-term target framework and tool for policy coherence in the strategic and programme work of different administrative branches and stakeholders in society.