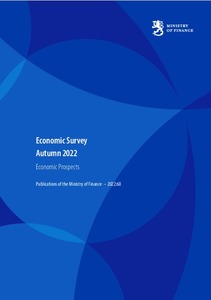 Publications of the Ministry of Finance 2022:60
Näytä kaikki kuvailutiedot

Gross domestic product (GDP) in Finland is projected to grow by 1.7% in 2022. Economic output developed favourably in the first half of the year, and employment has continued to grow rapidly. Economic growth is projected to slow more during the second half of the year than previously forecast in the summer. GDP growth will slow to 0.5% in 2023. The prices of goods and services, as well as energy, have also continued to rise faster than previously projected in the summer. GDP growth in 2024–2026 is projected to be faster than the potential economic growth rate at approximately 1.4% per year.