KOTAMO : Report on the state of equality and diversity in Finnish higher education institutions 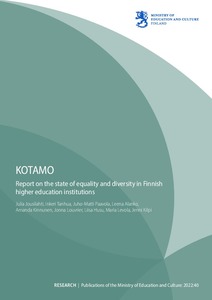 Publications of the Ministry of Education and Culture, Finland 2022:40
This publication is copyrighted. You may download, display and print it for Your own personal use. Commercial use is prohibited.
Näytä kaikki kuvailutiedot

The objective of the KOTAMO project (2021–22) has been to examine the state of equality, non-discrimination and diversity among teaching and research staff in Finnish higher education institutions and to propose recommendations for measures to address the problems identified. The study focused on gender equality and ethnic diversity. The report is based on a literature review, a survey addressed to higher education personnel, interviews with personnel and workshops held with personnel and financiers. The project was funded by the Ministry of Education and Culture and implemented by Demos Helsinki, Oxford Research, Includia Leadership, Innolink, Inkeri Tanhua (Equality Research Helsinki), Liisa Husu and Kaskas.

The report showed that Finnish higher education institutions still have a great deal of work to do in promoting gender equality and ethnic diversity and that they need support in this work. The main challenges are related to the inadequate implementation of equality and non-discrimination plans, the relatively low number of women and ethnic minorities at the highest career stages in universities, non-transparent recruitment processes, poorer career development among ethnic minorities (when compared to the majority population), discrimination experienced by these minorities, and a non-inclusive working culture. Promoting equality and diversity requires actions, support for higher education institutions and more research.

The conclusions and recommendations are those of the authors and do not necessarily reflect
the opinions of the Ministry of Education and Culture.