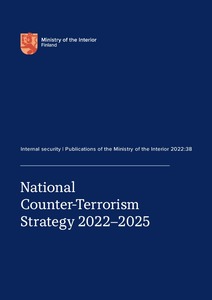 Publications of the Ministry of the Interior 2022:38
Näytä kaikki kuvailutiedot

With its National Counter-Terrorism Strategy, Finland responds to the demands presented to counter-terrorism activities by a changing operating environment and the threat of terrorism that has constantly been on the rise. The Strategy supports sustained and broad cooperation among all those involved in counter-terrorism. As part of its international security and development cooperation, Finland combats terrorism and the violent radicalisation and extremism that lead to it. This safeguards Finland’s national interests and fosters the safety and security of our country and its population.

The aim in preventing terrorism is to address the underlying causes of terrorism. Terrorist offences are prevented and detected as early as possible and criminal liability is enforced. Society’s capacity and recovery in the aftermath of a possible terrorist offence are strengthened through preparedness. Communications by the authorities support counter-terrorism by identifying narratives that encourage terrorism and addressing these.

The Strategy underscores the importance of respect for the rule of law as well as for fundamental and human rights also in counter-terrorism.

The Ministry of the Interior monitors achievement of the Strategy’s objectives and will prepare an interim report in 2024.