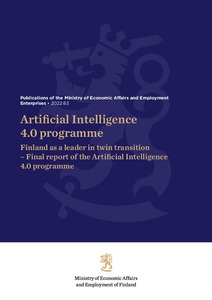 Ministry of Economic Affairs and Employment of Finland

Publications of the Ministry of Economic Affairs and Employment 2022:63
This publication is copyrighted. You may download, display and print it for Your own personal use. Commercial use is prohibited.
Näytä kaikki kuvailutiedot

In November 2020, Minister of Economic Affairs Mika Lintilä appointed a steering group led by Jussi Herlin to prepare an action plan for Finland to speed up the introduction of artificial intelligence and to promote the so-called fourth industrial revolution. The Artificial Intelligence 4.0 programme focuses on promoting the development and introduction of artificial intelligence and other digital technologies, targeting SMEs in the manufacturing industry in particular.

The vision of the programme is to make Finland a winner in the twin transition, which describes a simultaneous digital and green transition. To achieve this vision, three areas of development were identified:

A) Strengthening high-level research on key technologies as well as development activities and investments
B) Increasing the adoption of digital capabilities and technologies that accelerate the dual transition in industrial SMEs
C) Making Finland an international frontrunner in the twin transition.

An action plan with monitoring indicators was established for the development areas. In addition, the steering group proposed the creation of a roundtable, which would be responsible for advancing the action plan on a strategic level after the end of programme's term.

Upon meeting the objectives of the Artificial Intelligence 4.0 programme, Finland's industry will be clean, efficient and digital in 2030. Digitalisation will be utilised in the promotion of industrial productivity and international competitiveness, and ethically sustainable solutions that accelerate the twin transition will be increasingly offered to the global market. The renewal of industry through investments in RDI and education will play a key role in achieving the green transition.

The steering group's first interim report "From start-up to implementation" was published in April 2021 and the second interim report "Finland to become a winner in a twin transition" in December 2021. This final report, "Finland as a leader in the twin transition", presents the key messages of the entire Artificial Intelligence 4.0 programme, formulated by a broad-based group of participants over a period of two years.