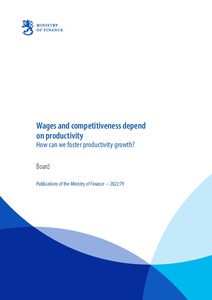 Publications of the Ministry of Finance 2022:66
Näytä kaikki kuvailutiedot

The report examines Finland's cost-competitiveness, development of earnings, innovation policy and the causes of its exceptionally slow productivity growth.

The underlying cause of Finland’s slow productivity growth is the permanent negative technology shock experienced by Finland's electronics industry; the weakened cost-competitiveness of the export industry following the financial crisis, which reduced incentives to invest; and the poor allocation of resources: the most productive companies do not have a sufficiently large share of the labour force. The analysis suggests that the poor allocation of resources significantly reduces productivity. However, this does not seem to be because of a lack of competition or because of the economy renewing slowly due to insufficient business dynamism.

Companies seem to be using less labour force and more capital inputs than what would be required to make a profit. On the one hand, this phenomenon indicates that there are problems in the availability of skilled labour and in labour market regulation, and on the other hand, that there are distortions in capital taxation.

Finland’s cost-competitiveness has remained reasonable over the past years. The competitiveness decomposition based on registry data indicates that the flexibility of wage formation has supported both cost-competitiveness and the development of earnings. Wages react not only to cyclical fluctuations, but also to differences in productivity and profitability, among other things. This kind of flexibility evens out the consequences of fluctuations and differences in the demand for labour and promotes the stable development of the economy.