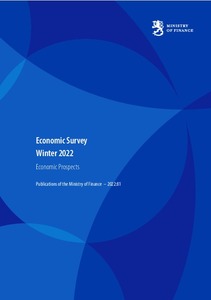 Publications of the Ministry of Finance 2022:81
Näytä kaikki kuvailutiedot

Finland's GDP is projected to contract by 0.2% in 2023. Private consumption will decline as rapidly rising prices reduce the real disposable income of households. GDP growth will then recover to 1.2% in 2024 as inflation slows and income growth accelerates. In spite of a slight decline of employment in 2023, the employment situation will remain good, and the employment rate will rise to 74.4% by 2025. GDP growth in 2025–2027 is projected to be faster than the potential economic growth rate at approximately 1.4% per year.

The general government budgetary position has improved considerably, driven by fast nominal growth and the growth of employment. The deficit will begin to widen again in 2023 due to declining economic growth and a consequent decrease in the growth of tax revenue. In addition, the measures taken in response to Russia's war of aggression and higher debt servicing costs will increase central government expenditure in particular. The general government debt ratio, which has contracted in recent years due to growing deficits and the slowing of nominal growth, will start to grow again in 2023. The debt ratio will be kept on an upward trajectory in the near future by substantial deficits in central government and local government, and higher debt servicing costs.