The Application of EU- rules to Social Services of General Interest 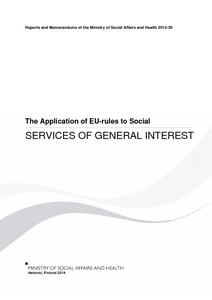 At its meeting on 29 March 2011 the Social Protection Committee renewed the mandate for the work of the Informal Working Group (IWG) on the Application of EU rules to Social Services of General Interest (SSGI) and specified the tasks on the working group as the following: analysis of the new Guide prepared by the Commission services on state aid, internal market and public procurement rules; follow-up to the Third SSGI Forum; on-going debate on state aid and public procurement rules. The following Member States participated in the activities of the IWG: Austria, Belgium, Czech Republic, Denmark, Estonia, Finland, France, Germany, Italy, Lithuania, Malta, Poland, Portugal, Slovenia, Norway, and Sweden. The IWG met seven times in Brussels and organised two seminars where the other EU institutions, advisory bodies and stakeholders were invited. Within the IWG and notably for this report, no formal positions were adopted. The goal was to raise awareness and to develop a common and better understanding of the issues raised. The objective was to build a common knowledge on the EU rules belonging to the internal market policies (state aid, freedom of services, freedom of establishment, and public procurement) applicable to SSGI among the members. The methodology used to prepare the report is based on the debates during the meetings and on the contributions of the members and of the external partners as well as on the discussions and feedback at the seminars which were organized by the working group.