The Proposal of the Working Group for a National Policy on Roma. Working group report 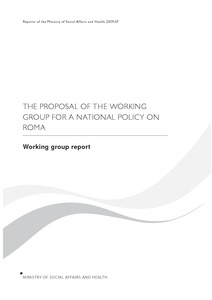 Selvityksiä 2009:57
This publication is copyrighted. You may download, display and print it for Your own personal use. Commercial use is prohibited.
Näytä kaikki kuvailutiedot

The Ministry of Social Affairs and Health set up in December 2008 a working group to draft the first Finnish National Policy on Roma. The decision to appoint the working group was based on the assignment given by Prime Minister Matti Vanhanen to the Advisory Board on Romani Affairs to draft a memorandum on developing the living conditions of Roma in Finland. The Working Group's term was from 1 January to 30 September 2009.

The Policy on Roma has been prepared by a broad-based working group consisting of representatives of authorities, research institutes and Roma in Finland. The vision of the programme is that Finland will be in 2017 a forerunner in Europe in promoting the equal treatment and inclusion of the Roma population.

The overall objective of Finland's first National Policy on Roma is to promote the inclusion and equal treatment of the Roma in different spheres of life by mainstreaming the promotion of equal treatment and non-discrimination into different functions in society.

The starting point in the Policy on Roma is that the present legislation and service system should create a good foundation for promoting the equal treatment of the Roma population. Furthermore, special measures are needed at all levels of authorities to reach the goal of inclusion and de facto equal treatment of the Roma. A principle in the policy is also to reinforce the Roma population's active involvement and functional capacity by making use of their own strengths.

The role of the local authorities in promoting equal treatment is emphasised, since in practice equal treatment and inclusion are realised in everyday life and at the local level. The Policy on Roma includes a proposal for adding to the state budget a particular grant for municipalities that they could use for developing the practices referred to in the Policy to promote the equal treatment of and to complement the basic services for the Roma population.

Strengthening the participation of Roma in education and raising their level of education in general are primary objectives in the Policy on Roma. The Romani language is a language under threat, even though the right of the Roma to maintaining their language and culture is safeguarded under the Finnish Constitution. Maintaining the Romani language, among other things by developing its instruction and research at university level, constitutes a prerequisite for implementation of the cultural rights of the Roma.