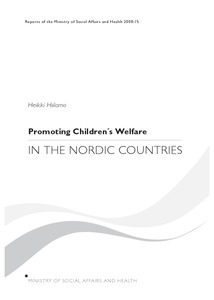 Selvityksiä 2008:15
This publication is copyrighted. You may download, display and print it for Your own personal use. Commercial use is prohibited.
Näytä kaikki kuvailutiedot

Nordic countries are undoubtedly world leaders in child welfare. In a recent report the United Nations children’s organisation UNICEF looked at 40 indicators for child well-being across 21 industrialised countries from 2000- 2003, including poverty, family relationships, and health. In its league table the Netherlands came top, followed by Sweden, Denmark and Finland. Norway’s position was seventh. Iceland was not included in the league table although some of the indicators covered it.


The aim of this study is to describe and compare the institutions that promote the welfare of children and youth in Nordic countries. These institutions concern policies that are related to child welfare in five Nordic countries, namely Denmark, Finland, Norway, Iceland and Sweden. The decision to exclude autonomous territories, Faroe Islands (Denmark), Greenland (Denmark) and Åland (Finland), was based on the fact that most programmes promoting child welfare in these territories do not have distinctive features.


By institutions promoting the welfare of children and youth we mean the overall system in each country under which public authorities, private actors and third sector parties (NGO’s, Churches etc.) provide services and welfare programmes to families with children. “Welfare” is used as a broad concept that includes children’s material resources as well as services targeted to children and families with children. Welfare is also conveyed by the ways in which children and youth are perceived in society, such as how they are involved in decision-making.


The institutional review was mainly based on a questionnaire that was sent to national informants in May 2007, i.e. contact persons in Ämbetsmannakomittén (the Nordic network of civil servants in the field of social and health policy). A review of policies promoting the welfare of children and youth in the Nordic countries exposes a large variety of services and benefits targeted for them. It is not possible to compare the policies in detail or to draw any farreaching conclusion in this respect. The general picture is that all the countries belong to the same family. There are clearly more similarities than dissimilarities among the Nordic countries.


The institutions with the most similarities concern ECEC, welfare services in school and health care. The major cross-Nordic differences in ECEC have to do with such variables as the legal entitlement to day care, administrative auspice (education, health, social welfare or a combination), parent and child involvement in developing services and the availability of open services. There are no major differences in the locus of care. All the Nordic countries rely heavily on public day care arrangements. The primary caregiver is a professional either in a day care centre or in family care (family care operates also under the public day care system).


There is a large variety of welfare services provided by schools. However, the responses to the questionnaire indicate major differences across municipalities both within and across the countries. Some countries provided school meals and school material more often than others.


When it comes to decision-making and parenting support more differences begin to emerge. However, the comparison suffered because extensive information on these topics could not be obtained from all Nordic countries. Parenting support services are characterised by unmet demand and a constant need for more services.


Norway seems to be ahead of other Nordic countries in promoting the interests of the child and the youth in decision-making. More measures are needed to make children conspicuous in decision-making and to meet the challenges put forward in the United Nations Convention on the Rights of the Child.


The financial side of family policy was not the prime focus of this review. Our results seem to indicate that parental benefits are most developed in Sweden. They are also an area of intensive development in other Nordic countries. From the outset, at least, the universal child benefit schemes have been almost identical across the Nordic countries. One legacy of the universal Nordic model of the welfare state is that income related child benefits play only a minor role. The clearest example of income related benefit is the housing benefit scheme in Sweden.


It would be tempting to evaluate differences in outcomes in light of the review of different policies among the Nordic countries. Given the limitations of this study it is not possible to relate family policy institutions to family policy outcomes.