Opportunities to reconcile family and work 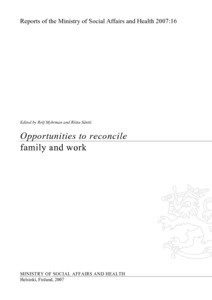 Selvityksiä 2007:16
This publication is copyrighted. You may download, display and print it for Your own personal use. Commercial use is prohibited.
Näytä kaikki kuvailutiedot

During two decades occupational well-being has been promoted in Finland within the so-called tyky-framework (promotion of work ability). The results indicate that personnel well-being may site in the absolute strategic center of firm. The work-life balance has become one of the major concerns in industrialised countries. The female labour participation lies in the heart of three vital areas: productivity, high employment, and fertility. Productivity and the competitiveness are not only determined within firms; welfare policy has a significant impact on the success of firms.

The efforts to increase women’s employment have not been contradictory to the favourable trend in fertility. Pension crediting for child care periods should be good enough for promoting gender equality in caring work and pension benefits of both parents. More balanced participation of both parents in the caring work of children would encourage both women’s employment and have a positive effect on fertility rates.

The major decision that a household with children makes, is whether or not the female enters labour force, and if she does, when. This determines the subsequent time allocation within the family. The resulting time allocation with the families with children, as in other household types, seems surprisingly similar across countries. The family leave schemes carry with them an inherent equality paradox. They have been created to support women in their combining of employment and family, but the practical realisations of the schemes are contradictory from the point of view of gender equality.