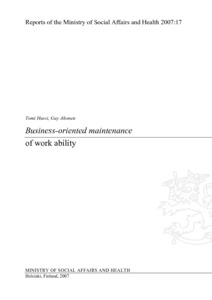 Selvityksiä 2007:17
This publication is copyrighted. You may download, display and print it for Your own personal use. Commercial use is prohibited.
Näytä kaikki kuvailutiedot
Tweet

During two decades occupational well-being has been promoted in Finland within the so-called tykyframework (promotion of work ability). This genuinely Finnish model has proved to be very successful. It has, however, not always been taken seriously enough by the top management of the companies. Therefore a need for strategically more relevant approaches has emerged. In order to meet this need the authors of the current report carried out a research project within the VETO-program. As a point of departure was taken the idea that work is getting increasingly knowledge intensive, and that the intangible assets therefore have an increasing strategic relevance. Therefore, the so-called Danish model was taken as the theoretical and practical point of departure of the project. This model was combined with the Finnish work ability approach. I the Danish model the management of intangible assets is done by the use of Intellectual Capital Accounts, which are structures according to s certain logic. Main elements of these accounts are: the knowledge narrative, the management challenges, the initiatives and the indicators.


The project was carried out in co-operation with two Finnish companies, within which business oriented wellbeing reports were developed. The background and the findings of this development work is presented in this report. Also the two case descriptions are attached. The project shows that the well-being of the personnel has many links to the actual business of the companies. The challenge lies in identifying them. Furthermore, the project indicates that personnel well-being may even site in the absolute strategic center of knowledge intensive organization.