The Finnish Board of Inter-Country Adoption Affairs. Annual Report 2006 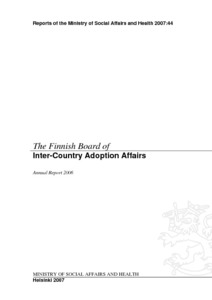 Selvityksiä 2007:44
This publication is copyrighted. You may download, display and print it for Your own personal use. Commercial use is prohibited.
Näytä kaikki kuvailutiedot

The Finnish Board of Inter-Country Adoption Affairs (Finnish Adoption Board) is the expert body in inter-country adoption affairs in Finland. It is subordinated to the Ministry of Social Affairs and Health. The Board was founded in 1985 and has since 1 July 1997 acted as the central authority meant in the Convention on Protection of Children and Co-operation in Respect of Intercountry Adoption (Hague Convention).


Granting permissions for inter-country adoption is one of the most significant tasks of the Board. In recent years, inter-country adoption has become increasingly popular. In 2005 the Board handled 275 permission applications. In 2006 a total of 413 applications were handled. The number was higher than ever before. The number of children arriving in Finland decreased from 308 to 218. This was first and foremost due to the tighter adoption regulations in China. 140 children were adopted from China in 2005 while in 2006 only 49 children arrived from China. In 2006 most adoptive children came to Finland from Russia, China, Thailand, and South Africa.


The Board had 31 meetings in 2006. 11 of them were meetings of the full composition and 20 of the limited composition.