Use of tobacco products, alcohol use and exposure to drugs in 1977–2005. Adolescent Health and Lifestyle Survey 2005 in Finland 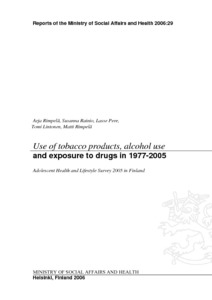 Selvityksiä 2006:29
This publication is copyrighted. You may download, display and print it for Your own personal use. Commercial use is prohibited.
Näytä kaikki kuvailutiedot

This report focuses on the use of tobacco products and alcohol among 12-18-year-old adolescents, their attitudes towards alcohol and tobacco, exposure totobacco smoke, and social exposure to drugs as displayed in the materials of the Adolescent Health and Lifestyle Survey between 1977 and 2005, with emphasis on trends in the 21st century. Adolescent health behaviours have beenfollowed by nationwide postal surveys using comparable methods every other year starting in 1977. The latest survey was conducted in February-April 2005. Altogether 6,503 adolescents responded to the inquiry. The response rate (66 %) was 3 % lower than that of the previous survey in 2003.


Use of alcohol, drunkenness, social exposure to drugs among both sexes, and smoking among girls became more common in the 1990s. The start of the new millennium marked a positive turn in health-related issues. The most remarkable changes in the current decade are:


Experiments with tobacco use are started at a later age than before and this trend also continued from 2003 to 2005. The rising trend of smoking among girls stopped and began to fall at the onset of the 21st century, among boys even earlier. The proportions of daily smokers among 14-16-year-olds approach those of 1979, which were the lowest ever measured.


Snuff experiments and current snuff use among boys have decreased after 2001, apart from 18-year-olds. Among girls, both experimenting and regular snuff use remained rare.


The falling trend of exposure to tobacco smoke (passive smoking) was highlysignificant after 1991 when it was measured for the first time.


Attitudes towards smoking have become stricter. In 2005, a ban on tobacco sales to under 18-year-olds was approved of by nearly all; non-smoking in coffeeshops, bars and restaurants was accepted by almost 70 %. Among 12- and 14-year-olds, nearly 80 % considered that smoking is something that is done by ‘losers’.


Abstinence has increased in the 2000s and experiments with alcohol are started at a later age. Use of alcohol decreased further among 12-14-year-olds between 2003 and 2005. Among 16- and 18-year-old boys, the falling trend of weekly and monthly alcohol use came to a standstill, while among 18-year-old girls, the use kept rising until 2003.


On the whole, the trend of tobacco products use among adolescents has followed the course envisaged in the objectives of the national public health programme, Health 2015. The reduction in alcohol prices in 2004 seems to have interrupted the falling trend of alcohol use and contributed to increased weekly binge drinking among 18-year-old boys.