The Finnish Board of Inter-Country Adoption Affairs. Annual Report 2005 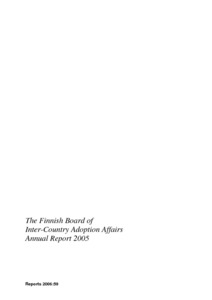 Selvityksiä 2006:59
This publication is copyrighted. You may download, display and print it for Your own personal use. Commercial use is prohibited.
Näytä kaikki kuvailutiedot
Tweet

The Finnish Board of Inter-Country Adoption Affairs (Finnish Adoption Board) is the expert body in inter-country adoption affairs in Finland. It is subordinated to the Ministry of Social Affairs and Health. The Board celebrated its 20th anniversary in 2005. The Board has been in force since 1 July 1997 as the central authority meant in the Convention on Protection of Children and Co-operation in Respect of Intercountry Adoption (Hague Convention). A follow-up meeting for the Convention, attended by the Board representatives, was arranged in Hague in 2005.


In quantitative terms, granting permissions for inter-country adoption is the most significant task of the Board. In recent years, inter-country adoption has become increasingly popular. In 2005 the Board handled 275 permission applications. During 2005 the Board received reports of altogether 308 arrivals of adoptive children in Finland. Most adoptive children have come to Finland from China, Thailand, Russia and South Africa.


The Board had 24 meetings in 2005. 10 of them were meetings of the full composition and 14 of the limited composition.


In 2005 the Board submitted two initiatives to the Ministry of Social Affairs and Health concerning inter-country adoption affairs.


In 2005 it was Finland’s turn to arrange the meeting of Nordic adoption authorities. The meeting was held on 20 October 2005. The Board also took part in the organisation of a jubilee seminar on adoption affairs held at Finlandia Hall on 21 October 2005.