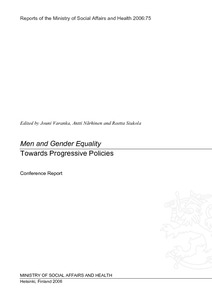 Selvityksiä 2006:75
This publication is copyrighted. You may download, display and print it for Your own personal use. Commercial use is prohibited.
Näytä kaikki kuvailutiedot

The Conference Men and Gender Equality – Towards Progressive Policies was held in
Helsinki on 5–6 October 2006. The conference formed a part of the Finnish EU Presidency
programme and its organisation was the responsibility of the Finnish Ministry of Social
Affairs and Health in cooperation with the European Commission. The Conference gathered
together experts in the theme of men and gender equality from different parts of the European Union.


By organising the Conference on Men and Gender Equality, the Finnish EU Presidency
wanted to highlight the important role of men in promoting gender equality. The starting point
was that by paying more attention to the relationship between men and gender equality, we
could increase men’s contribution to the promotion of gender equality as well as address some problems men in particular are facing. This, in turn, would promote gender equality and, most importantly, the status of women.


During the Conference, the main focus was on policies, i.e. what has been done and what
should be done concerning men and gender equality. The Conference concentrated on the
themes of 1) reduction of segregation in education and training, 2) gender mainstreaming in
health policies and practices, 3) violence, and 4) reconciliation of work and family life. This
report pulls together the presentations given at the Conference. Furthermore, it includes the
reports of the discussion in the working groups.