Alcohol issues in Finland after accession to the EU. Consumption, harm and policy framework 1990–2005. 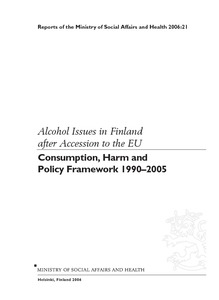 Selvityksiä 2006:21
This publication is copyrighted. You may download, display and print it for Your own personal use. Commercial use is prohibited.
Näytä kaikki kuvailutiedot
Tweet

The publication dealing with alcohol issues in Finland after accession to the
EU examines the present situation in a more extensive context than the national
level. The publication discusses how alcohol consumption in Finland
has developed compared to other European countries. Alcohol use in Europe
has changed considerably in all countries, but in different ways and
even in opposite directions. Also Finland’s place on the European ‘alcohol
map’ has changed thoroughly.

When examining Finns’ alcohol consumption and its adverse effects it
can be noted that consumption is further increasing among women, as well
as to some extent among men and people of retirement age. Alcohol use
among young people is increasing in some groups but, on the other hand,
in recent years also the proportion of young people who refrain from alcohol
use has increased. For the major part, alcohol-related harms have increased,
and the adverse effects are associated with variations in total alcohol
consumption.

The alcohol policy environment is changing continuously: the EU legislation
and the expanded markets have undermined the traditional Finnish alcohol
policy and reduced the effectiveness of price policy. In the situation
generated by Finland’s EU membership we have begun to seek new ways of
influencing alcohol consumption and its adverse effects. On the other hand,
discussion about alcohol problems from a public health perspective has also
been raised at the EU level.

It is also assessed in the publication how the main objectives defined in the
Government Resolution on Strategies in Alcohol Policy of autumn 2003 have
been reached. At the moment the objectives are far from being realised.