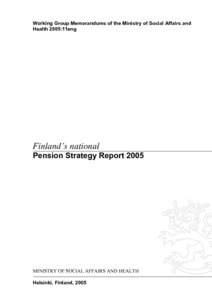 Työryhmämuistioita 2005:11eng
This publication is copyrighted. You may download, display and print it for Your own personal use. Commercial use is prohibited.
Näytä kaikki kuvailutiedot
Tweet

The Laeken European Council agreed on the content and procedures in the application of the open method of co-ordination in the field of pensions. The introduction of the open method of co-ordination involved endorsing the eleven common pension policy objectives at the Community level, their inclusion in the national pension strategies, and regular monitoring of the attainment of the objectives at EU level. The common objectives are based on the three principles for pension policy that were adopted at the Gothenburg European Council in June 2001, comprising adequacy of pensions, financial sustainability of the pension systems, and adjustment of the pension systems in response to the changing needs of the economy, society and individuals.

Finland submitted its first national Pension Strategy Report to the EU in September 2002, evaluating the implementation of the common objectives in the national pension system. The joint report of the Commission and the Council on adequate and sustainable pensions that was drawn up based on the national reports was endorsed in the Employment, Social Policy, Health and Consumer Affairs Council and in Ecofin in March 2003.

A broad-based Working Group appointed by the Ministry of Social Affairs and Health has prepared the second national Pension Strategy Report. The report deals with the Finnish pension system and the pension policy decisions made in Finland, as well as the grounds for them and their social, employment and economic motives from the point of view of each pension policy objective adopted at the Laeken European Council. Furthermore, the report looks at the progress made in the reforms dealt with in the previous report and updates the information furnished in it.

Finland’s national pension policy decisions are, in broad outline, in harmony with the EU’s common objectives. The challenges of the Finnish pension system are mainly due to the change in the age structure and the accelerated growth of the pension expenditures resulting from that. Achievement of longer work careers and a higher employment rate are issues that are crucial to ensuring both the adequacy and sustainable financing of pensions.