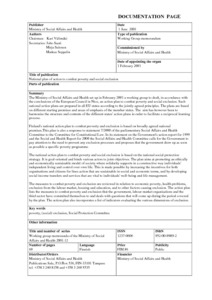 Työryhmämuistioita 2001:12
This publication is copyrighted. You may download, display and print it for Your own personal use. Commercial use is prohibited.
Näytä kaikki kuvailutiedot

The Ministry of Social Affairs and Health set up in February 2001 a working group to draft, in accordance with the conclusions of the European Council in Nice, an action plan to combat poverty and social exclusion. Such national action plans are prepared in all EU states according to the jointly agreed principles. The plans are based on different starting premises and areas of emphasis of the member states. The aim has however been to harmonise the structure and contents of the different states' action plans in order to facilitate a reciprocal learning process.
Finland's national action plan to combat proverty and exclusion is based on broadly agreed national premises.This plan is also a response to statement 7/2000 of the parliamentary Social Affairs and Health Committee to the Committee for Constitutional Law. In its statement on the Government's action report for 1999 and the Social and Health Report for 2000 the Social Affairs and Health Committee calls for the Government to pay attention to the need to prevent any exclusion processes and proposes that the government draw up as soon as possible a specific poverty programme.
The national action plan to combat poverty and social exclusion is based on the national social protection strategy. It is goal-oriented and binds various actors to joint objectives. The plan aims at promoting an ethically and economically sustainable model of society where solidarity supports in a constructive way individuals' independent living and control over own life. This is made possible by increasing the incentives for both organisations and citizens for lines action that are sustainable in social and economic terms, and by developing social income transfers and services that are vital to individuals' well-being and life management.
The measures to combat poverty and exclusion are reviewed in relation to economic poverty, health problems, exclusion from the labour market, housing and education, and to other factors causing exclusion. The action plan lists the measures to combat poverty and exclusion that the government, labour market organisations and the third sector have committed themselves to and deals with questions that will come up during the period covered by the plan. The action plan also incorporates a list of indicators evaluating the various dimensions of exclusion