Unemployed jobseekers and their percentage of the workforce by municipality 2015 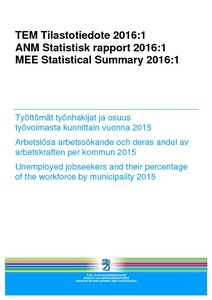