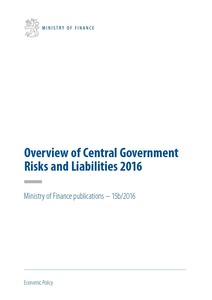 Fiscal risks refer to a range of factors that have an unanticipated effect on government finances. Fiscal responsibilities, and thereby risks, may emanate from decentralised sources within the government (e.g. the state budget economy), other public finance (e.g. government funds, State enterprises, municipalities), the private sector (e.g. government-controlled enterprises), or the financial markets (e.g. the banking sector). The nominal value of all government guarantees has doubled over the previous few years, totalling slightly over EUR 49 billion at present, which is nearly 24 per cent of GDP. In addition, the amount of capital liabilities payable upon request to international financial institutions has multiplied mainly following the measures for managing the financial crisis in the EU. Their nominal amount, as a share of GDP, is approximately 9 per cent (nearly EUR 18 billion). As a result of the financial crisis, Finland’s fiscal position has worsened dramatically. The country therefore faces much poorer prospects of facing new economic disturbances than before. The costs arising from even a partial realisation of the government’s constantly increasing guarantee obligations may result in a significant burden on the national economy. This places a special emphasis on the careful monitoring and management of the fiscal responsibilities