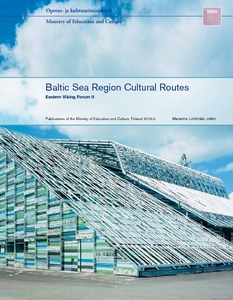 Publications of the Ministry of Education and Culture, Finland 2015:3
This publication is copyrighted. You may download, display and print it for Your own personal use. Commercial use is prohibited.
Näytä kaikki kuvailutiedot

The international discussion forum on Baltic Sea region cultural routes, ’Eastern Viking Forum II’, held in Kotka in May 2014, focused on ways of utilizing a historic knowledge base, archaeological research and creative industries for the enhancement of cultural tourism in the area. The Baltic Sea Region (BSR) in early history and especially in the Viking Age was chosen as an example of a period that, beyond the concept of nations, links the region.

The report gathers the main messages of the forum for wider use:

- Exploit the diversity of the BSR and its multi-layered history when profiling it for tourism; thereby it’s possible to attract a diverse audience
- Embrace a larger scale and create connections between other sectors than tourism and culture only; agriculture, education, environment and the local economy
- Connect sites and routes to contemporary cultural expressions and fresh business ideas by coherent narratives – bearing in mind that these tourism interventions should maximise the opportunities for local communities to implement their economic, social and environmental goals
- Join regional and European cultural tourism initiatives

The concept of cultural routes was highlighted as a practical tool for goal-oriented co-operation across sectors and borders. The Forum Declaration underlines the importance of creating an environment that supports cultural tourism.

The Kotka forum was organised by the Ministry of Education and Culture, Finland as a part of the programme of the Finnish Presidency of the Council of the Baltic Sea States (CBSS) 2013–2014. The forum enhanced a systematic approach to policy-making in the fields of culture and creative industries within the work of regional councils. The Northern Dimension Partnership on Culture (NDPC) Steering Committee, the Barents Joint Working Group on Culture of the Barents Euro-Arctic Council, the CBSS Senior Officials Group for Culture and the Priority Area Coordinators of the Steering Group of the EU Strategy for the Baltic Sea Region (EUSBSR) participated in the event. The forum was a sequel to a seminar of the NDPC on Viking heritage in North-West Russia, arranged in St Petersburg in 2012.