Emissions of Black Carbon and Methane in Finland 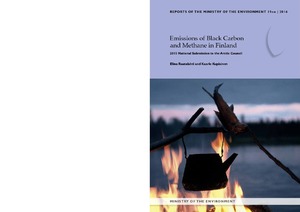 The Arctic air continues to warm at twice the global average rate. Loss of Arctic snow/ice cover and thawing of permafrost accelerate warming on a global basis, and melting of land-based ice contributes to global sealevel rise. In other words the rapid warming of the Arctic has profound consequences not only for the Arctic region but also worldwide. What happens in the Arctic doesn’t stay in the Arctic. To slow the pace of warming over the next two to three decades – globally and in the Arctic – reducing emissions of short-lived climate pollutants such as black carbon and methane is essential, along with action to reduce CO2, emissions. Not only do these short-lived substances persist in the atmosphere for far shorter periods than CO2, but they also trap more heat on a per-unit basis. In addition, black carbon that falls on Arctic ice or snow reduces reflectivity and increases heat absorption, further accelerating melting and warming. In April 2015 the Ministers of the Arctic Council adopted a Framework for Enhanced Action to Reduce Black Carbon and Methane Emissions. The Framework lays out a common vision for enhanced action to accelerate the decline of black carbon emissions and significantly reduce methane emissions. As an important step towards achieving this vision the Framework provides an “ambitious, aspirational and quantitative collective goal on black carbon” would be adopted at the 2017 ministerial. An Expert Group, chaired by the Arctic state holding the Council chair for that two-year cycle, is tasked to periodically assess progress of the implementation of the Framework, and to inform policy makers from Arctic states and for participating Arctic Council Observer states of the status. This includes preparing, on a once every two-year cycle of the Arctic Council chairmanship, a high level “Summary of Progress and Recommendations” report, with appropriate conclusions and recommendations. To support the process Arctic States agreed to submit biennial national reports on their existing and planned actions to reduce black carbon and methane, national inventories of these pollutants and projections of future emissions, where available. All Arctic States, seven Observer States and the European Union submitted national reports. Several countries’ reports contain their first-ever national black carbon inventory. This report presents the Finnish national report to the Arctic Council