WoS or Scopus? The state of Finnish scientific research at the start of the 2010s according to international citation data 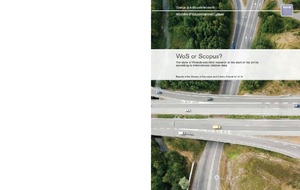 Publications of the Ministry of Education and Culture, Finland 2013:18
This publication is copyrighted. You may download, display and print it for Your own personal use. Commercial use is prohibited.
Näytä kaikki kuvailutiedot

This report describes the state of, and developments in, Finnish scientific research in the period 2000–2010. The report was produced with reference to publication and citation data in the Thomson Reuters’ Web of Science (WoS) and Elsevier’s Scopus databases. An appendix also contains a comparison of the data.

According to WoS, Finland’s citation and the Top10 index have started to rise again, having shown a downward trend in the early 2000s. The citation index calculated with reference to Scopus data, meanwhile, is rising moderately, though steadily, and the Top10 index indicates a rise in the mid-2000s. The citation index is a reflection of the international impact of research. The Top10 index, for its part, indicates whether the research conducted by an examined unit (country, university, research institute) achieves a share among the total number of publications of the 10% that are cited most. Both indicators in this report are so structured that an examined unit is well placed in an international comparison if the indicator attains a value that is greater than 1. The upward trend in indicator values would suggest that Finnish science is moving in a positive direction, but that is at least partly influenced by structural changes in progress in global data, the most significant of which are the increase in contributions from China and India and the decrease in those made by the United States.

The highest values on the citation index for individual research organisations that are biggest in terms of number of publications were obtained by the National Institute for Health and Welfare, Kuopio University Hospital and the University of Helsinki.

Almost half of the Finnish publications in the period 2008-2010 were produced in collaboration with foreign research organisations. The share of international co-publications grew in the 2000s in all scientific disciplines. Collaboration has a particularly important role to play in the natural and medical sciences. The share of international co-publications in the humanities is significantly lower than with other disciplines.