Evaluation of the Academy of Finland 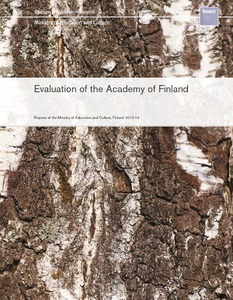 Publications of the Ministry of Education and Culture, Finland 2013:14
This publication is copyrighted. You may download, display and print it for Your own personal use. Commercial use is prohibited.
Näytä kaikki kuvailutiedot
Tweet

The Research and Innovation Council recommended in 2010 that the Academy of Finland should be evaluated. Following a competitive process, Technopolis and ETLA have undertaken this evaluation. A panel of eminent scientists supported us. Their report appears in this volume as Appendix A.

The evaluation has been done in a time when there are pressures for change in the way research is funded, both in Finland and more generally. The importance of several global or ‘grand’ challenges, including climate change, ageing of the population and HIV/AIDS, leads to a questioning of the traditional ‘two pillar’ approach with one agency handling more or less fundamental research and a second funding industrially relevant research and innovation. Thus, at the European level the new Framework Programme Horizon 2020 has separate streams for Excellent Science, Competitive Industries and Tackling Social Challenges. At the Finnish level, the need to fund and coordinate strategic research that tackles social challenges is reflected in the reorganisation of the research institute sector and a proposal to establish a new strategic research fund for them within the Academy. At the same time, there is perceived to be a funding gap between the research funded by the Academy and Tekes’ increasing focus on innovation and entrepreneurship that needs to be filled by strategic and applied research.

The Academy of Finland is the main funding body for scientific research in Finland and has played a key role in Finland becoming one of the innovation leaders in Europe in recent years. The objectives of the Academy are

The Academy is in many ways an attractive organisation. Its portfolio of funding instruments meets the expressed needs of the Finnish research community and enables Finnish researchers to explore new research areas of importance. The Academy’s schemes contribute to prestige and career opportunities, stronger internal positions for grant holders within their organisation and improved national visibility. The Academy is considered successful in its mission to finance high-quality scientific research. Its review process is high quality. Academy-funded researchers perform better in bibliometric terms than other Finnish researchers.

Researchers are satisfied overall with Academy processes regarding the announcement of the calls, the clarity of the calls and the applications process. Further, they perceive that highly competent and well-respected people run the Academy, which has the trust of the community in general. It intelligently explores ways to improve its processes and operates at a level of good international practice. Last but not least the Academy is in international comparison a very efficient funding agency that imposes only a low level of administrative burden on researchers.

The main source of dissatisfaction in the community is the implementation of the Full Economic Cost principle. A concern in the policymaking community is that the Academy does not make best use of its opportunities to provide advice on science policy. Some people would like to see the Academy play a role as a ‘champion’ or lobbyist for science but it cannot credibly do this while it is to offer neutral advice on science policy and while it also needs a budget in order to do its funding work.

The Academy has in important respects stayed the same while the world around it has changed – partly because its governance does not encourage change and partly because major change has not been demanded of it. In particular, this leaves the question of how to fund strategic research and research on societal challenges unanswered. The Academy’s strategy is unspecific, both in general and with respect to the international dimension. There is insufficient coordination across the ministries and agencies responsible for research to tackle national needs or to let Finland take strong positions within the pattern of specialisation emerging via the European Research Area. The current period of reflection about strategic research and the state organisations that fund and do research in Finland is therefore an excellent time in which to reconsider the role of the Academy.