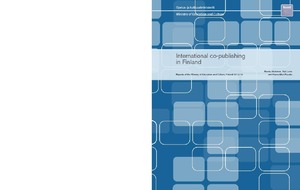 Publications of the Ministry of Education and Culture 2012:19
This publication is copyrighted. You may download, display and print it for Your own personal use. Commercial use is prohibited.
Näytä kaikki kuvailutiedot
Tweet

This study looks at international co-publishing in Finland and the citation counts of publications in different disciplinary groups in 1990–2009. The results presented here are based on the Thomson Reuters Web of Science (WoS) publication and citation database from 1990 to 2009.

To summarise, this study indicates that co-publishing of Finnish scientists has diversified: the share of publications produced as a result of international cooperation, involvement of several country groups, and national inter-organisational cooperation in all WoS publications increased, and the more diverse the co-authorship was, the higher the citation count.