Cultural exportation is visible, leads to renewal and has an impact: Final report for the Cultural Export Promotion Programme 2007–2011 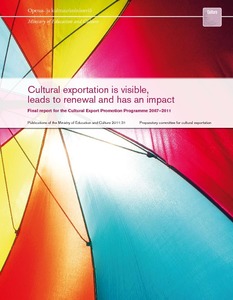 Publications of the Ministry of Education and Culture 2011:31
This publication is copyrighted. You may download, display and print it for Your own personal use. Commercial use is prohibited.
Näytä kaikki kuvailutiedot
Tweet

The Finnish Cultural Export Promotion Programme 2007–2011 was drawn up in cooperation by ministries and cultural players participating in the preparatory committee for cultural exportation during 2006 and 2007. The Committee’s report, Powering up Finnish Cultural Exports, was handed over to the Minister of Culture, Minister of Trade and Industry, Minister for Foreign Trade and Development and Minister for Foreign Affairs on 1 March 2007. Following the preparations, the Government Programme of Matti Vanhanen’s second cabinet came to state that the creative economy would be strengthened and the economic significance of culture increased by promoting cultural exports and entrepreneurial activity.

On 5 September 2007, the Ministry of Education appointed a steering committee and a preparatory committee for the purpose of implementing the Cultural Export Promotion Programme. The steering committee was chaired by Minister of Culture and Sport Stefan Wallin, and its members included Ministers Mauri Pekkarinen, Ilkka Kanerva (as of 2008, Alexander Stubb), Paavo Väyrynen and Tuija Brax, as well as State Secretary Velipekka Nummikoski. The preparatory committee was chaired by theatre director Johan Storgård, and its members included government officials from the Ministry of Education and Culture, the Ministry of Employment and the Economy and the Ministry for Foreign Affairs, as well as representatives of industry organisations and businesses in the cultural sector.

The programme’s general goal was to recognise cultural and creative industries as genuine fields of export and making their export status equal to that of other export industries. In line with the Government Programme, another goal was to increase the contribution of culture to the national economy, that is, to boost employment, value added, output and export revenues.

Work was based on the fact that a) Finland produces a great deal of high-quality and unique cultural offerings, b) there is little room for any considerable growth in domestic consumption of culture and c) the international markets for culture have grown rapidly.

The Cultural Export Promotion Programme and its measures complemented other actions taken in the fields of culture, business and foreign policy. Moreover, the programme resulted in the first systematic and inter-ministerial framework for the promotion of cultural exports. As expressed in the Powering up Finnish Cultural Exports report: “Cultural exportation will primarily have recourse to the existing structures and forms of support, which requires a major change in the ways of thinking and action both in the cultural industries and amongst export promoters”.

The purpose was not to use the export promotion programme to support the foundation of creativity, production or the basic cultural infrastructure – for which dedicated support systems already exist – but expressly to support the stage at which a cultural product or service comes into contact with audiences. What this means from the perspective of cultural policy is that the objective was to strengthen the economy of culture and to improve the opportunities of art and culture professionals to gain international benefit from their products.

As for industrial policy, the objective was to bring cultural and creative industries more extensively under the scope of industrial policy measures and to use the potential of the creative economy to diversify the country’s business and export structure. From the perspective of foreign policy, especially public diplomacy, the goal was to make culture a more integral part of the development of the Finnish country brand.

This final report focuses on making a general assessment of the measures and results of the export promotion programme and proposing an outline for the promotion of cultural exports during the next Government’s term of office. The final report also includes descriptions of activities carried out in 2010. Separate cultural exportation reports about programme implementation were drawn up in 2007–2009. The reports contain detailed descriptions of various measures and projects carried out within the programme framework. At the conclusion of the Finnish Cultural Export Promotion Programme 2007–2011, the preparatory committee for cultural exportation will hand in its report to the Ministry of Education and Culture.