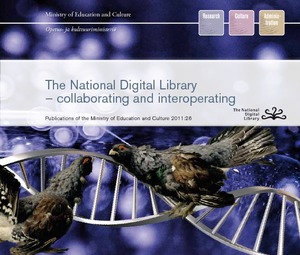 Publications of the Ministry of Education and Culture 2011:26
This publication is copyrighted. You may download, display and print it for Your own personal use. Commercial use is prohibited.
Näytä kaikki kuvailutiedot
Tweet

The National Digital Library is the Ministry of Education and Culture’s way of creating a unifying structure for contents and services with the purpose of promoting the availability of digital information resources of archives, libraries and museums and developing the long-term preservation of digital cultural heritage materials. It is one of the key electric research and culture infrastructures currently under construction in Finland.

The National Digital Library also contributes to the European Union’s objectives concerning the digitisation of cultural materials and scientific information and their digital availability and longterm preservation. Priorities of the project are:
- The creation of a joint public interface for the materials and services of libraries, archives and museums
- The digitisation of key materials of libraries, archives and museums and making them available trough the public interface
- The development of a long-term preservation solution for digital cultural heritage materials
- Competence enhancement.

Through the public interface, users can perform searches of digital information resources of libraries, archives and museums renew loans, buy pictures, order materials and use a wide variety of other services.

A large majority of the 16 million objects digitised during the project – including historical photographs and maps, old newspapers, church records, war diaries, works of art, artists’ sketch books, museum artefacts and herbarium specimens – will be available to all through the public interface.

The public interface will be introduced in phases, beginning in 2011. It is maintained and developed centrally at the National Library of Finland in cooperation with participating organisations. The body responsible for maintaining the technical environment is CSC – the IT Center for Science.

The National Digital Library is the most extensive cooperation project between libraries, archives and museums so far in Finland. During the project, cooperation both between and within the library, archive and museum sectors has increased and intensified. Competence enhancement has taken place through training events and update meetings that have attracted thousands of participants in total.

According to plans, the administration model in the next phase (2011–2013) will be two-layered. The administration layer consists of the Ministry of Education and Culture as well as the management and steering groups of the National Digital Library. The service system layer consists of the public interface, which is being maintained and developed further, and of the long-term preservation solution, which is in the planning and implementation phase.