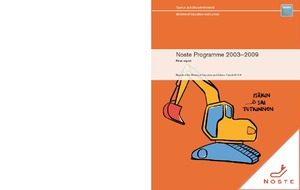 Publications of the Ministry of Education and Culture, Finland 2010:8
This publication is copyrighted. You may download, display and print it for Your own personal use. Commercial use is prohibited.
Näytä kaikki kuvailutiedot
Tweet

Description of the Noste Programme

The Noste Programme was implemented in 2003–2009 to raise the level of education among adults. Objectives included to strengthen the participation in working life and career development of adults who only have basic education, to reduce the labour shortage resulting from the retirement of the post-war generation, and to improve the employment rate.

In accordance with the Noste Decree, the following could be completed under the Programme: vocational upper secondary qualifications, vocational qualifications and specialist vocational qualifications and their parts, computer driving licences and modules, and since 2007 knowledge work examinations, as well as unfinished comprehensive school and upper secondary school education. The Programme was intended for 30-59-year-olds, although 25-year-olds and above were also eligible for completing comprehensive school education. The Programme was primarily targeted at the working population.

The quantitative target was to reach approximately 10 per cent of the target group coming within the sphere of the studies.

Noste funding was primarily granted to local and provincial projects that promoted entry into education, education and examinations as well as related support measures. In addition to these, the Programme involved a national project supporting outreach activities. Pursuant to the Noste Decrees, the Programme was to be implemented through tripartite cooperation on several levels. Education providers were required to participate in workplace-specific implementation of the education in cooperation with employers and employees.

Apart from examination fees, the studies were free of charge for students.

In 2003–2009, a total of 25,680 Noste students began their specially funded studies and qualifications. The relative proportion of Noste students is approximately 7.3% of the total target group of 350,626 persons at the start of the Programme. Regionally, the differences in reaching the target group varied from 3.9 per cent to 12.4 per cent.

The report data have been compiled since 2002 on the participation of the basic education group and age group corresponding to the Noste group in adult education leading to a qualification, funded by a statutory government contribution, and labour administration funding, as well as in general upper secondary studies. This way, it could be demonstrated that the participation of the Noste group in vocational adult education leading to a qualification actually increased, rather than was merely transferred to another form of funding.

Long-term follow-up and evaluation as shown that the effects of the Noste Programme were considerably more widespread and diverse than the Programme’s quantitative targets. Graduates and workplace representatives thought that their professional competence and work motivation had increased because of the studies. Also, their self-esteem and sense of security in working life were seen to have improved, although qualifications did not usually lead to new jobs, positions or a pay rise.

The Noste Programme challenged education providers to create new operating models for adult education; outreach activities were developed to motivate the part of the population that was least interested in participating in education. In the context of adult education, outreach activities motivated and succeeded in reaching a much larger audience than solely the Noste group. Outreach activities implemented in companies opened up new and deepened existing business partnerships. According to the follow-up, the best and most successful studies in terms of student volumes arose as a result of tripartite cooperation, where both the employer and employee were committed to the education process. At its best, extensive networks during the Programme created new operating cultures among education providers as well.

During the Programme, a large number of adult education institutions made improvements in assessing the educational needs also of less-educated staff at workplaces, and were better able to reach and include the less-educated adult population in studies and provide opportunities for these groups to complete their qualifications.