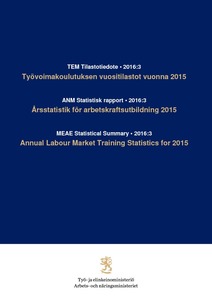 Statistical Summary -annual publications 3/2016
This publication is copyrighted. You may download, display and print it for Your own personal use. Commercial use is prohibited.
Näytä kaikki kuvailutiedot
Tweet

Of those entering labour market training, 57 per cent were men and 43 per cent women. A total of 6,800 of those having entered training, i.e. 15 per cent of all entrants, were under 25 years of age. The share of over 50-year-olds was 16 per cent.

Of those entering labour market training in 2015, some 72 per cent were unemployed (excluding lay-offs); the corresponding figure for 2014 was 69 per cent. The share of lay-offs was 2 per cent, down one per cent by 2014. Of those who entered labour market training, 5 per cent were people with disabilities or long-term illnesses. Foreign nationals entering training represented some 160 nationalities. The share of foreign nationals was 34 per cent.

Of those having completed labour market training in 2015, 49 per cent were employed two months after the end of training, equalling the corresponding figure for 2014.