The Creative Economy and Culture at the Heart of Innovation Policy 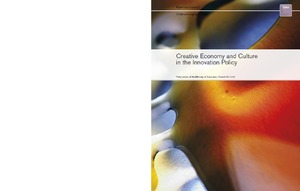 Publications of the Ministry of Education, Finland 2010:13
This publication is copyrighted. You may download, display and print it for Your own personal use. Commercial use is prohibited.
Näytä kaikki kuvailutiedot
Tweet

The Ministry of Education has strengthened the opportunities for growth in the creative economy through its strategic work. The operational programme for the regional development of culture, sport and youth policy, which was published in 2003, included cultural entrepreneurship as a theme for developing action strategies in regional policy. The creativity strategy work carried out in 2005 and 2006 created the foundation for the development of the creative economy. The report entitled Creative Industries Business Development: A Networked Operating Model, published at the end of 2006, set out the direction for many measures to develop business activities in the creative industries and cultural entrepreneurship. This publication acts as a continuation to previous publications by the Ministry of Education and provides, in particular, perspectives on the strategic development of the creative economy in different regions within programme and strategy work.

Globally, the international trade in products and services in the creative industries increased annually from 2000 to 2005 by 8.7% according to the UN’s Creative Economy report. The share of exports rose from 1996 to 2005 from USD 227.5 billion to USD 424.4 billion. The share of services increased annually by 8.8 per cent. The world is currently experiencing a global recession, so employment in the cultural sectors is important. The sector involves not only public and third sector companies but also many micro-companies and SMEs, craftsmen and freelancers, who are self-employed in spite of the recession. The production of intangible services constitutes a significant part of the activities in the cultural industries. There is a particular need to strengthen service production and innovation because they can meet the challenges posed by the decline in the consumption of goods as a consequence of climate change and sustainable development.

Many traditional sectors are currently in difficulty. The challenge for Finland is to find a new direction for innovation policy at the national and regional level. The creative economy and culture offer one opportunity for new initiatives to strengthen Finnish innovation activities. With this publication, the Ministry of Education and Cultural Theme Group hope to offer new perspectives on the sector to those working in the creative economy and especially regional developers. At the end of the articles, the different authors present their opinion on development proposals that could be implemented in various development activities.

The Ministry of Education and Cultural Theme Group wish to thank all the article authors and the individuals that have participated in preparing this publication.