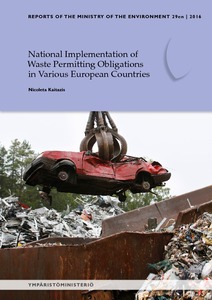 Riitta Levinen, Ministry of the Environment

The report identifies national characteristics of the permit obligations set by the Waste Framework Directive (2008/98/EC) of the European Parliament and of the Council. The report compared the waste policies of Finland, England, the Netherlands and Denmark focusing solely on the permitting scheme. The report demonstrates the possible different solutions Member States have when implementing the Directive and highlights some of the most interesting details in the permitting schemes, which could be potentially used in Finland. Finland has incorporated the permit obligation of the Waste Directive to its national environmental permit, forming one single permit. However, England and the Netherlands have adopted two types of waste permits by establishing a lighter permit for most common waste operations and a heavier permit procedure for establishments and undertakings operating high-risk waste management operations. Denmark has incorporated the obligations of the Directive into its environmental permit but smaller facilities are regulated by a different procedure. The report also demonstrates that the use of the opportunity to exempt certain waste disposal and recovery activities is variable. Finland has seemingly exempted the least amount of waste operations, while England, Denmark and the Netherlands show to have numerous exempt waste operations